HomeInsightsDifferent Types of Storage Tanks and their uses

Different Types of Storage Tanks and their uses

DIFFERENT TYPES OF STORAGE TANKS AND THEIR USES

What are Storage Tanks?

Such tanks come in a variety of sizes, ranging from 2 to 60 metres in diameter or more. These are often placed within containment basins to control spillage in the event of a tank break.

Petroleum production and refining, petrochemical and chemical manufacture, bulk storage and transfer activities, and other businesses that consume or produce liquids and vapours are all sectors that use storage tanks. 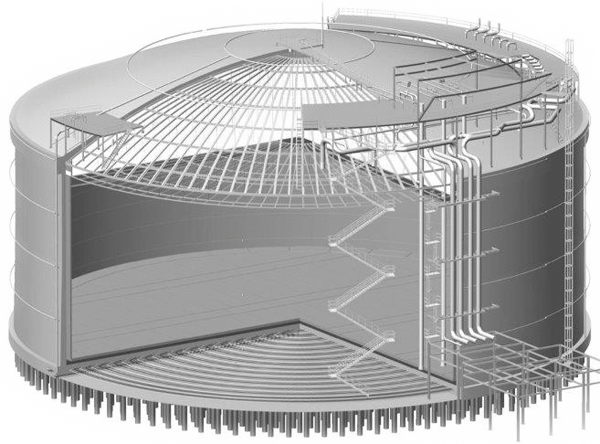 The most common types of storage tanks used to store liquids are as follows:

The first four tank types are cylindrical in form, with the axis perpendicular to the subgrade. These tanks are nearly completely subterranean. Horizontal tanks may be deployed in both above- and below-ground applications. To retain structural integrity at high pressures, pressure tanks are often horizontally orientated and spherically formed. They are raised. Cylindrical or spherical variable vapour space tanks are produced.

The fixed-roof tank is the least expensive method of the widely common tank design to build and is generally considered the bare minimum suitable equipment for storing liquids. A typical fixed-roof tank consists of a cylindrical steel shell with a permanently attached cone- or dome-shaped roof. Although modern storage tanks are often completely welded and intended to be liquid and vapour tight, older tanks were often glued or bolted together and are not vapor tight.

A Breather Valve (pressure-vacuum valve), that’s often placed on many fixed-roof tanks, enabling the tank to function at a very low internal pressure or vacuum.

Because this Valve prevents the escape of vapours even when the temperature, barometric pressure, or liquid level varies only little, the emissions from a fixed-roof tank may be significant.

Furthermore, gauge sample wells, float gauges, and roof manholes allow access to these tanks and may be sources of volatile emissions.

A ‎common floating roof tank is built out of an open-topped cylindrical steel shell with a roof that floats on the surface of the stored liquid, rising and falling in lockstep with the liquid level. A floating roof is composed of three components: a deck, fittings, and a rim seal system. Floating roof decks are constructed of welded steel plates and are available in three basic configurations: pan, pontoon, or double deck.

Whereas many pan-type decks are in use today, the current trend is toward floating pontoon and double-deck roofs.

Manufacturers include a variety of variations on all these main kinds of floating decks, each emphasizing a different characteristic, such as complete liquid contact, weight bearing capability, roof stability, or pontoon arrangement. Except for the tiny annular gap between the deck and the shell, the floating deck covers the liquid surface; the deck may be in touch with the liquid or float immediately above it on pontoons.

For tanks, there are permanently fixed and floating roofs. Internal floating roof tanks are classified into two broad categories:

The purpose of the fixed roof isn’t just to serve as a vapour barrier, but to block the wind. Another very popular kind of fixed roof is a self-supporting aluminium dome roof, which is fastened. They are fluidly ventilated, much as the internal floating roof tanks.
For exterior floating roof tanks, the deck fittings and rim seals are essentially similar.

Horizontal tanks are made so that the length of the tank is not more than six times the diameter to guarantee structural integrity. Most typically, horizontal tanks are fitted with pressure-vacuum vents, gauge hatches, and sampling wells. Underground tanks may be cathodically protected to avoid corrosion of the tank casing.

Cathodic protection is performed using sacrificial anodes linked to an impressed current system or by employing galvanic anodes in the tank. But, most refined petroleum products include corrosion inhibitors that render internal cathodic protection ineffective.

Variable vapour space tanks are occasionally used separately, even if they are often integrated with fixed roof tank vapour spaces.

Variatile vapour space tanks may be lifter roof tanks or flexible diaphragm tanks. Telescoping roof tanks are used on lift-type roof tanks. Wet seal: It is a trough filled with liquid, whereas dry seal: It utilises a flexible coated cloth.

Each LNG storage tank has two cylinders: one with LNG and the other with insulating materials. Containment tanks are the most frequent tank type. Tanks are 55 m (180 ft) in height and 75 m in Diameter.

Without leaking, the pressure and temperature in the tank will continue to increase. LNG is a cryogen and is preserved liquid at very low temperatures. When the pressure is maintained constant, the tank’s temperature will not change. This is called auto-refrigeration.

Storage tanks are essential in modern industry. To ensure maximum safety and efficiency, chemicals, petroleum, natural gas, water, and all types of fuel, from big-rig diesel to jet fuel, are transported and stored in secure, high-performance tanks. Custom builds, setups and unique treatments and coatings are available to withstand corrosive and hazardous materials, through which these systems can be designed to suit a wide range of settings and facility needs.

how can we help you?

Contact us at the Velosi office nearest to you or submit a business inquiry online.